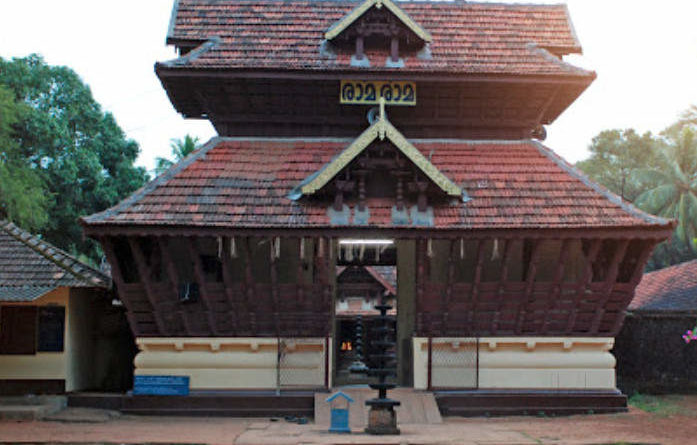 Karimpuzha Sriramaswamy Temple is situated in the Palakkad district, Ottapalam Taluk near the silently flowing Kunthipuzha River. This is one of the rarest Sreerama idols in India. The idol depicts the ever sacrificing Lord Rama, renunciating on the shores of the Sarayu River before his ascent to heaven. He is accompanied by his ever obedient companion, Hanuman.

When the Samoothiri conquered Thrikannamathilakam, the Earalppad was entrusted with the governing of Nedunganaadu .Sri Krishnapuram and the neighbouring areas came under the Nedunganadu . Thereby Samoothiri entrusted his brother Earalppad with the governing activities of the temple. So Earalppad made this Temple the centre point and constructed a palace for simplifying his governing activities. There by started the revival of the temple.

The main diety of the temple, Sri Ramaswamy is sitting facing west. While the other deities are Ganapathy, Shivan, Bhagavathy and Chamravattath Ayyappan & Shasthavu. Hanuman’s presence was felt near the northern side of the Thidappalli. Since 2 years Hanumans diety has been placed in the temple and it has been known as Dakshina Ayodhya or Southern Ayodhya. The old story goes that a Rishi was worshipping a Sree Rama diety nearby with his severe penance and so this place was later known as Arattukadavu Para. It is in memory of this ancient Rishi that even now a lamp is being lit on the eastern end for a banyan tree standing on the northern side of the river.

The history of the temple dates back to the times of the Calicut Zamorin. The period from AD 700 to 1500 saw the grandeur and glory of the Zamorin’s ruling period. It is during the start of the period the Zamorin’s family shifted their royal residence from Kondotty to Kozhikode / Calicut. And thereby Calicut became the Economic Capital and political Hub of the dynasty. Soon after this the Zamorin was busy in expansion of his territory and many political invasions were declared. Valluvand and nearby territories came under his rule.

The Zamorin felt that Karimpuzha was a prominent location if it came under his empire. He invaded the area and declared his brother Earalppad as the ruler of the province. The zamorin continued his military invasions, maintaining Karimpuzha as the focal point. The Earalppad assisted his brother in these endeavors .Most of the areas coming under Palakkad belt was invaded on time to time basis and thereby their ruling territory expanded. In all these efforts Karimpuzha provided them a fertile soil. And so Karimpuzha, a small village occupied prime importance in the political map of Zamorin’s kingdom.

During the period of AD 1000, the Zamorin now shifted his attention to revive and develop Karimpuzha. Earalppad constructed a royal palatial palace, Ettukettu, flanked by 8 built up sides, on the banks of the river. He then started the reconstruction of the temple. The temple is presumed to have been there long long back even before the times of Zamorin’s invasion.

During the time of the renovation of the temple, the shift in the placement of the deity’s face is now observed as a holy festival. This is celebrated on the day of the 3rd Thursday between the mid Nov – mid December every year. Near the Earalppad’s palace the family deity Sree Bhagavathy is sacredly placed and is now known as Bhagavathy Kottil. The army chieftain’s home Cherulli Achan Madam is also seen near the Earalppad’s palace, on to the South of the temple. 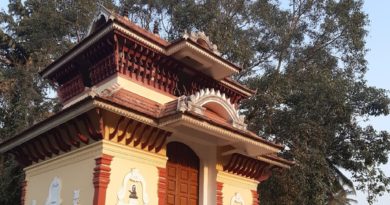 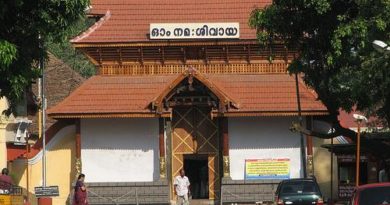 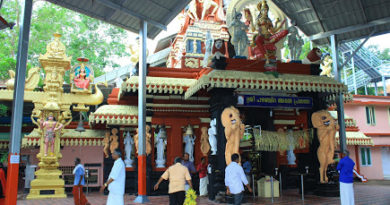